On the same day the U.S. Supreme Court ruled against DOMA and Prop8, paving the way for greater access to marriage for millions of gay Americans, Canada's parliament closer to granting divorces for those same people. 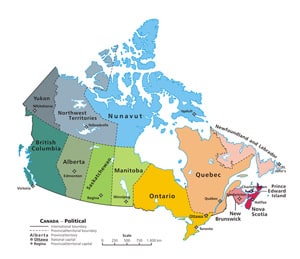 Last week Towleroad linked to a Maclean's article that stated the legislation could be indefinitely stalled, leaving many divorce-seeking non-Canadian same-sex couples who married in Canada stuck with their nuptials, no matter how badly they might want a divorce.

Instead of following the normal process for a bill where it is debated and voted on at various stages and studied by MPs on a committee, C-32 [the divorce bill] was declared passed at all stages in the Commons and it moved on to the Senate where it was also dealt with quickly. It landed in the Senate Wednesday and was passed Friday.

The original issue erupted when an odd loophole was exposed by a foreign same-sex couple who's home jurisdictions didn't recognize their marriage, and thus they sought divorce where they were originally married. But, Canada had a requirement that to obtain a divorce, one had to live in Canada for an entire year. The loophole wasn't acknowledged until now most likely because such hetero couples would never have had to return to Canada to get a divorce—their home countries simply would have granted it.