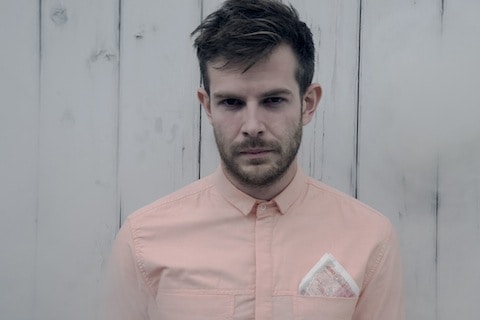 It’s an exciting month for Bright Light Bright Light. The Welsh-born pop artist (né Rod Thomas) celebrates the release of his latest EP, Moves, tonight at Le Poisson Rouge in New York City, and he is playing Pride celebrations later this month in Seattle and San Francisco. His achingly beautiful dance tracks do much more than just get your feet moving; they can stop your heart and bring tears to your eyes. It’s no wonder he’s been drawing comparisons to Erasure, Kylie and Robyn.

We spoke with the openly gay artist about what his hometown has in common with Twin Peaks, what it means to be an out artist and what fans can expect from the next album.

What was it like growing up in South Wales?

It was kind of the opposite of what I do now. I grew up next to a coal mine. There was nothing else really around. I was an only child as well, so I started playing lots of instruments. I just kind of listened to the radio a lot as my way of seeing the world outside my little valley. I got really into music and started writing songs. It was a nice, peaceful childhood. One of the reasons I like things like David Lynch is because I grew up with like rolling mountains and fir trees everywhere, so Twin Peaks was like a weirder version of where I grew up.

What are some of the early artists that influenced you?

I really loved Depeche Mode and Erasure on the radio when I was growing up. I love Bjork as well, I think she’s incredible. I remember having this really weird relationship with her, where I didn’t understand it at first, but I kind of liked the fact I didn’t understand it. She’s one of the artists that really inspired me to challenge what I thought was acceptable or what I thought was achievable.

What was it that drew you to pop music?

With pop music I like the energy. I like the color in the videos, and I like the playfulness. Where I grew up is very calm, and I think I really enjoyed the euphoria of some of the production. Being able to dance to something added a very different atmosphere to my immediate surroundings. I really liked dance music just because it had a bit of a pulse and a drive, and where I grew up was so sedate.

What’s been your experience in New York?

There’s something about the city, about the rhythm of it and the pace, and the energy that really works with me. I felt a lot calmer and a lot more who I want to be since I spent a few months here. I’m really in tune with it. I find it a really inspiring place, like the architecture and the people and the nightlife and the daylife. I think everyone presumes that where you grow up is your home, and that’s where you feel most at peace with yourself. But for a lot of people — particularly for people that travel a lot and people that do something creative — that’s not ever really the case.

How has being an out artist informed your experience?

It’s an important part of me as a person and as an artist. I don’t define myself as a “gay artist,” because that has lots of loaded implications. I don’t think of myself of like a spokesperson for the gay community. But I am very proud of who I am, and I’m never, ever inclined to be anything other than honest about my sexuality when I’m asked about it or when I’m talking about that. I don’t try to gender rectify songs to make it sound anything more generic. It’s actually quite liberating. There’s a lot of artists that say it’s been a real hindrance to them, and I’ve never felt that. I’ve always felt that it’s been embraced.

What’s next after this EP?

I’ve been writing the next record for the last few months. It’s going really well. I’m really excited about the progression. I’ve been working with some of the same people from the last record, some new people. So I’m tying up this album campaign, and I’m very excited to start with the next one.

How would you describe how the new album is evolving?

Whereas the last full-length was sort of pensive and kind of reflective, the next album is a little more celebratory. It’s kind of a bit more euphoria in there. It sounds a bit bigger, but there’s also a lot more strings and piano in it as well. I wanted it to have a little more of a grown-up feel. It’s not as ‘90s-leaning as people thought the last one was at times, but it’s still very danceable.

And what can people expect from tonight’s show at Le Poisson Rouge?

It’s an amazing venue. There’s going to be new songs, lots of favorites from the album. I’ve got guest singers, and the band is fantastic. We’ve got some visuals. It will be really fun. It’s going to be a really nice rounding up of my time in New York, because I’m back to London very soon after San Francisco. So, it will be a nice thanking everyone for the support, for coming to the shows, celebrating the release, celebrating the city that I love and just having a blast.

A deluxe edition of Bright Light Bright Light’s debut full-length album ‘Make Me Believe In Hope’ is available on iTunes. You can see him perform live tonight at Le Poisson Rouge in NYC, June 27 at Folsom Pride in San Francisco and June 29 at Queer Carnival in Seattle.