UFC fighter Josh Thomson says "I don't care" about gay marriage but he sure does have a lot of opinions about it. 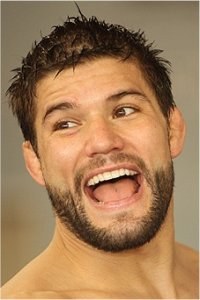 Thomson sparked a heated debate by posting this question on his Facebook page: “Should you be allowed to marry whoever you want? Before you answer that, should u be allowed to have more than 1 wife?”

Not too big of a deal, but things got really testy when Thomson responded to a friend who asked “Should you be allowed to decide what other sound-minded adults do with their lives?”

“I’m only asking a question,” Thomson countered. “My next question is, should siblings be allowed to marry siblings? My point is, where do you draw the line? I personally don’t care who you marry but I also am smart enough to know that it opens a gateway to men/women trying to marry young kids, siblings marrying each other and people having multiple husbands an wives. You have to think all of these things are okay otherwise your stopping them from being happy as well which is hypocrisy. Equality doesn’t stop with gay marriage, it just starts with it.

“I’m not against gay marriage, I’m also not for it. I don’t care! I do care what it may lead to In the future once you change the definition of marriage for gay marriage. You can’t say that it doesn’t open the door way for other topics like I mentioned. I know it sounds crazy but people will bring these types of issues to the table once the definition is changed.”