Yesterday I reported that Wausau, Wisconsin is planning to hold its first Gay Pride parade on June 22, and local and state bigots aren't happy about it. 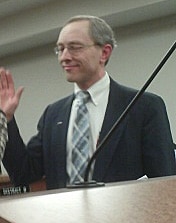 “I represent an overwhelming majority of district 3 residents who oppose allowing a parade of deviant-behaving individuals to be escorted by public law enforcement members through the very heart of our family-oriented city to a beautiful family-oriented public park where no doubt their choice of indecent behavior will be on full display for influential children and the media to proclaim it worldwide. This isn’t speech. This is behavior. I ask that all residents stay away from the parade or if you do go, stand with your back to the parade of deviant-behaving individuals. I respectfully ask for our various media outlets to pay little or no attention to the parade just as you do to any other parade in this city…”