Deadline Hollywood reports that a film version of Patricia Nell Warren's novel The Front Runner, perennially trapped in development hell, may be receiving renewed attention from Hollywood producers and development executives given this week's historic decisions handed down by the Supreme Court: 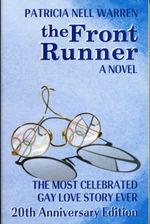 "The subject matter — a handsome ex-Marine college track coach who has
kept his sexuality secret until he becomes the coach of a world-class
runner he falls in love with, until they declare their love right before
he becomes a gold medalist, and deal with the tragic consequences of an
intolerant society — has long tempted Hollywood but always fell short
of the start line.

'For me, as the author, this was always about two characters who wanted
to be married,' she said. 'In the early ’70s, that wasn’t possible. The
closest they could get was a personal commitment ceremony, which was a
big thing in the early ’70s. If my characters were alive today, they
would be tremendously excited by what the Supreme Court did this week.'"

Many have tried to turn the groundbreaking 1974 novel that has sold over 10 million copies into a feature film, including Paul Newman, director Frank Perry (Mommie Dearest), and producer Jerry Wheeler. The story also received revived interest after the success of Brokeback Mountain when many in Hollywood were looking to capitalize on the financial success of that film. Though financing has yet to be secured, Perry has finally regained the rights to her novel after a protracted battle, thus clearing the way for production to begin should backers step up to the plate.