In a new Gallup opinion poll of Americans released this week, a majority of Americans–52 percent, in fact, say they would vote in favor of a federal law legalizing marriage equality in all 50 states.  Forty-three percent said they would vote against the law.

Of course, that's never going to happen–because that's not how marriage law works in the U.S.  From the early founding of the country, it's fallen to individual states, rather than the federal government, to decide who can and cannot be married and to issue marriage licenses recognizing such unions.  Hence the reason that one of the significant arguments against the Defense of Marriage Law (and one that was cited by the Supreme Court in its decision striking down the 1996 law) was that it intruded improperly on an issue traditionally reserved for state control.

Nevertheless, the new Gallup poll results are important to note, especially the breakdown of support amongst different demographic groups.  At the top end, groups such as liberals, those who express no religious affiliation and Democrats supported marriage equality overwhelmingly, with respondents showing 77, 76 and 70 percent support, respectively.  Other groups with strong support for equal marriage rights nationwide were 18 to 34 year-olds (69 percent) and moderates (63 percent), as well as respondents in the West and East.

Indepdents, those who attended church at least once a month and respondents in the Midwest demonstrated slim majority support for the hypothetical federal marriage equality law, with margins in the low 50s.

In fact, there were only a few groups for which majorities don't support equal marriage rights, and none of them were surprising.  A slight plurality of men support marriage equality, albeit at only 48 percent to 46 percent opposition.  Majority opposition to marriage equality was found amongst only six demographic groups: respondents in the South, those 55 and older, Protestants, Republicans, Conservatives and those who attend church weekly (who came in at a whopping 73 percent opposed). 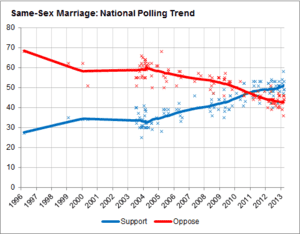 Gallup also found limited evidence for a shift in Americans' opinions towards marriage rights for same-sex couples since the Supreme Court's decision striking down DOMA in June: 53 percent of respondents said in May that same-sex couples should be allowed to marry, while 54 percent expressed that view in the new survey.

Clearly, all signs on marriage equality are pointing in one direction–earlier this year, Gallup released another poll showing a majority of Americans favors allowing same-sex couples to marry.  Perhaps even more importantly, that survey found the largest gap ever measured between those who think being gay is something people are born with and those who think it is affected by factors such as one's upbringing.  Even in the wake of the Supreme Court's historic consideration of same-sex couples' right to marry–and the sharp upswing in media attention on marriage equality–most Americans seem to know where they stand on the issue–at least for the present moment.

Previous Post: « Marriage Equality Just Hours Away For Minnesota And Rhode Island
Next Post: Neil Patrick Harris Tells Conan About The Time He Had His Butt Grabbed By Elton John’s Husband – VIDEO »