The Baton Rouge Advocate has published a distressing exposé which reveals that gay men have been arrested by police in Louisiana for simply agreeing to consensual sex. The Baton Rouge Sheriff’s Office has performed these undercover stings since 2011. The men have been charged, detained and, in some occasions, fined under the state's old sodomy laws which were invalidated when the U.S. Supreme ruled on Lawrence v. Texas in 2003.

The piece reveals: "There had been no sex-for-money deal between the two. The men did not agree to have sex in the park, a public place. And the count against the man was based on a part of Louisiana’s anti-sodomy law struck down by the U.S. Supreme Court a decade ago."

The District Attorney has not pursued any of the cases: 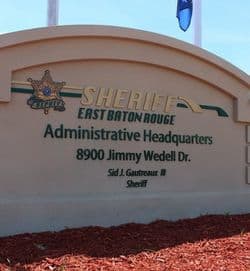 District Attorney Hillar Moore III said his office refused to prosecute each one of the cases because his assistants found no crime had occurred. After inquiries from the newspaper last week, he arranged to meet with Sheriff’s Office investigators to discuss the implications of the Supreme Court ruling.

Casey Rayborn Hicks, a Sheriff’s Office spokeswoman, denied that investigators had been misapplying the anti-sodomy law, which remains among the state’s criminal statutes.

“This is a law that is currently on the Louisiana books, and the sheriff is charged with enforcing the laws passed by our Louisiana Legislature,” Hicks said. “Whether the law is valid is something for the courts to determine, but the sheriff will enforce the laws that are enacted.”

Moore noted that public sex acts and the solicitation of “unnatural carnal copulation” for money remain illegal. But those elements were lacking from these 12 cases, and most of the men were arrested after agreeing to have sex away from the park at a private residence.

“The Sheriff’s Office’s intentions are all good,” Moore said. “But from what I’ve seen of these cases, legally, we found no criminal violation.”

As Think Progress points out, no crimes are being committed:

Manchac Park, where the stings have largely taken place, has been known as a place where “cruising” for anonymous sex takes place, but neither talking about sex nor agreeing to sex are violations of obscenity laws.

When Lawrence was decided, then-Louisiana Attorney General Richard Ieyoub issued a statement asserting that the state’s anti-sodomy law could not be enforced, except in cases of prostitution and bestiality. Still, the law remains on the books, as it does in many other states.

The most recent arrest occurred on July 18.