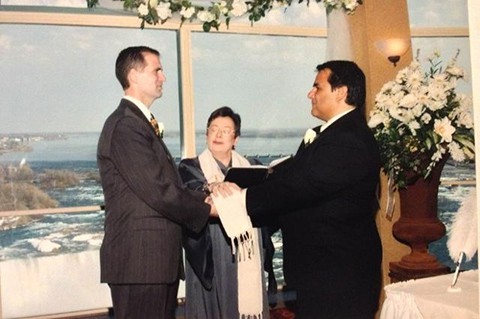 A couple in Kentucky has joined the ranks of countless others who are fighting state-wide bans on same-sex marriage, USA Today reports. The lawsuit, filed in Louisville Friday morning by attorneys Shannon Fauver and Dawn Elliot, is the first federal challenge to Kentucky's ban on same-sex marriage which not only prohibits same-sex couples from marrying in Kentucky but also denies recognition of same-sex marriages performed elsewhere. The couple who brought the suit, Michael DeLeon and Gregory Bourke, married in 2004 in Ontario, Canada but have been together for over 30 years, first meeting in college at the University of Kentucky. DeLeon and Bourke have adopted two children together, a son, now 15, and a daughter, 14. Part of their motivation in filing was to have the same rights and securities afforded to heterosexual couples and their children. DeLeon told USA Today,"There's no reason why we should be second-class citizens…We should be at the table with everybody else."

However, the tide has begun to turn with the US Supreme Court's gutting of DOMA and effective overturn of California's same-sex ban, Prop. 8. Of the day those rulings were handed down Bourke said, "That was probably the most hopeful day we've had in our 31 years of being together." Immediately after, Fauver and Elliot saw an opportunity to make a change in Kentucky, and they began to seek out a couple they could represent to challenge the state's ban. "We thought somebody should do it…It's our duty as lawyers to try to right wrongs when we see them," Fauver said. In their 19 page brief, Fauver and Elliot hit all the right notes, invoking equal protection, heightened scrutiny, and discrimination:

"Kentucky’s exclusion of same-sex couples from marriage infringes on the
Due Process and the Equal Protection Clauses of the Fourteenth Amendment
to the United States Constitution. This discriminatory treatment is
subject to heightened scrutiny because it burdens the fundamental right
to marry and because it discriminates based on sex and sexual
orientation. But it cannot stand under any level of scrutiny because the
exclusion does not rationally further any legitimate government
interest. It serves only to disparage and injure lesbian and gay couples
and their families."

You can read the full brief via WLKY HERE.