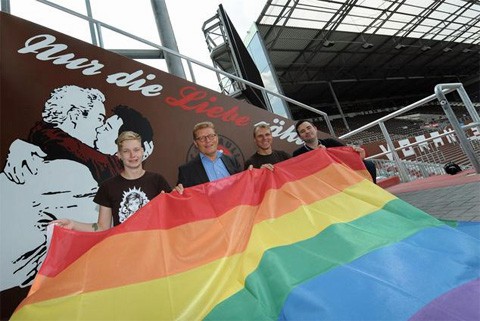 The German football club St. Pauli made a groundbreaking statement against homophobia last Thursday when it decided to raise the rainbow flag permanently in its stadium.

"The club has been active for many years against homophobia and discrimination," St. Pauli's vice-president Gernot Stenger told the club website. "With this flag we are giving this highly visible sign that these issues have great importance at St. Pauli and we are working hard on them."

A member of the club's gay and lesbian fan club, Dirk Brullau, backed the initiative and said it would be a "quantum leap for the football world" if a Bundesliga team followed suit.

Hamburg's St. Pauli, which enjoys a cult following due to the skull and crossbones shown on the flag of its supporters, plays in Germany's second tier.