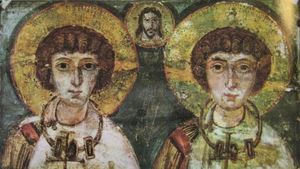 Many LGBT rights advocates considered the Pope's recent message of tolerance towards gay priests and Christians to be quite revolutionary, despite what some have argued to the contrary. However, according to historian John Boswell and his seminal book Same-Sex Unions in Premodern Europe, the Christian church has already performed same-sex unions. Granted, it was some centuries ago during the Dark Ages. Nevertheless, io9 reports that:

"There were dozens of records of church ceremonies where two men were joined in unions that used the same rituals as heterosexual marriages. (He found almost no records of lesbian unions, which is probably an artifact of a culture which kept more records about the lives of men generally.)"

The Catholic historian's book was published in 1994, shortly before his death from AIDS. As io9 noted, "given the Church's present-day views on gay marriage, these detractors argued, Boswell's history seemed like wishful thinking." Now, the book is being re-released as an e-book, and finding itself in the spotlight once again. It chronicles much of Boswell's research the he conducted throughout the 1970's and 80's, sifting through legal and church records from throughout the late Roman Empire and Early Christian church.

"One easy answer is that — as Boswell argues — the Church reframed the idea of marriage in the 13th century to be for the purposes of procreation. And this slammed the door on gay marriage. Church scholars and officials worked hard to suppress the history of these marriages in order to justify their new definition. 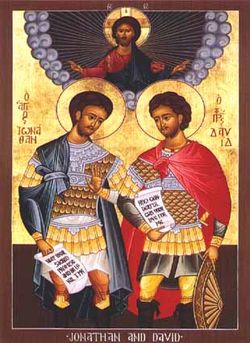 Before you start celebrating, though, know that the unions described in these documents don't necessarily mirror the same-sex unions we recognize today. These unions took place in era during which Europe was still transitioning from its last years of the Roman Empire. Thus, these unions most likely reflected the kind of same-sex relationships that existed in Rome. Documents would often refer to the two men as "brothers" rather than "husbands". Annalee Newitz, author of the io9 piece, also noted that "marriages over a millennium ago were not based on procreation, but wealth-sharing." Unions like this were not always sexual in nature. That said, the documents still present evidence that the Early Christian church performed marriage ceremonies between two men.

One legal scholar even "wrote a law journal article explaining that Boswell's book could even be used as evidence for the legality of gay marriage, since it shows evidence that definitions of marriage have changed over time." Most of the individuals who cite religion as their chief objection to marriage equality cite the belief that the Church's current definition supports the same, "natural", divinely inspired definition that it has always had. Boswell's work certainly presents evidence that contradicts that.

Unfortunately, Boswell is no longer around to defend his work. If he was, though, there is no doubt that he would have one or two things to say about the current legal state of same-sex marriage. One can only hope that the release of his work in this much more accessible and cost-effective might allow more people to get their hands on it.