The end of "Don't Ask, Don't Tell" was a landmark in the quest for equality for all LGBT soldiers. Unfortunately, its impact tended to affect some more than others, as transgendered troops continue to be ineligible for open service in today's armed forces.

The Palm Center intends to help end that reality. Thanks to a new $1.35 million-dollar grant, the institute is launching the Transgender Military Initiative, which plans to conduct 11 studies, attempting to find "whether and how the U.S. armed forces could include transgender troops without undermining readiness," according to a press release. The Palm Center is previously known for "coordinating more than a decade of research into the military’s 'Don’t Ask, Don’t Tell' policy," and intends to take a similar approach once again. The group plans to conduct research "in areas ranging from privacy and medical accommodations to the experiences of foreign militaries and sports programs" over the next three years.

The project's leader, Indra Lusero, explained the potential significance of this new research in a statement to BuzzFeed:

"This academic research will inform an important public conversation by providing facts and evidence about transgender military service and gender expression in armed forces. Militaries around the world are updating their policies, and we are already conducting research in Canada, Britain and Australia to learn whether their trans-inclusive regulations have impacted readiness." 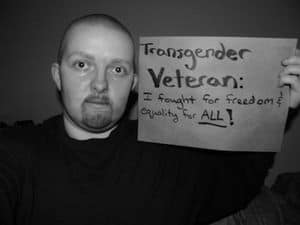 The grant money comes courtesy of the Tawani Foundation, which is run by Col. James Pritzker, cousin of Commerce Secretary Penny Pritzker. Tawani's stated purpose is “to affect significant transformation of organizations and educational programs that enrich knowledge, preserve military heritage, improve health and wellness and conserve unique sites for enduring positive impact on individuals, communities and societies.” Nathaniel Frank, the author of Unfriendly Fire: How the Gay Ban Undermines the Military and Weakens America and a former Palm Center staffer himself, would no doubt agree that this new research could certainly accomplish that goal. He praised the news, saying:

“The education dimension for getting people to understand the importance of openly gay service in the military, getting the country and the military and the Congress in the right position was a long game. The same kind of long game in regard to transgender service has not yet been played.”

The group claims that the Transgender Military Initiative is the first study of transgender military service to be conducted on such a large scale. No doubt that trans troops such as former SEAL Team 6 member Kristin Beck are hoping that this study elicits an impact on par with its scale. Unfortunately, due to the nature of this new "don't ask, don't tell", we won't know exactly how many trans troops there are until we allow them to serve openly.