African-Americans account for 14% of the population and half of the more than 1 million cases of HIV in the United States, according to data from the Centers for Disease Control and Prevention. Among all MSM (men who have sex with men), African Americans account for the highest number of new HIV infections.

One advocacy group in the Los Angeles area, In The Meantime Men, is seeking to remedy that problem, and recently released a billboard ad encouraging HIV testing among African-American MSM. These billboards, up until recently, depicted two shirtless black men embracing each other, along with the slogan, "Our Love is Worth Protecting …. We Get Tested," and were strategically placed in areas with higher demographic concentrations of African American residents. However, due to recent controversy, these ads have been replaced with a much more generic alternative, which simply contains the word "HOMOPHOBIA" in bold letters with an "X" through it.

Rev. Eric P. Lee, president of the Greater Los Angeles chapter of the Southern Christian Leadership Conference, explained in an interview with the LA Times how his community responded to the group's original ads.

"The immediate reaction of the community was shock…It showed how we have commonly dealt with homosexuality in the community, which is 'Don't ask, don't tell,' a silence that doesn't condemn or affirm." 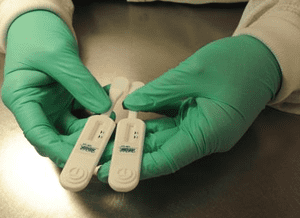 HIV Prevention advocates argue that this mindset is one of the reasons why men in African-American communities refuse to get themselves tested. For gay and bisexual black men, advocates say that the act of getting tested might "out" them to the rest of their community, whereas straight black men might refuse to be tested for fear of being perceived as gay. Jeffrey King, executive director of In The Meantime Men, argues that this very mindset is the exact reason why the group chose to release their ads in the first place, "to address one of the key factors in why we're seeing high rates of HIV, especially among gay black men."

"Nobody wants to talk about the fact that our kids are having sex and a large part of them are gay and are having sex with each other…One of the key reasons we're seeing HIV rates as high as they are is linked to homophobia in the community."

While stigma is just one of the many factors contributing to increased infection rates, Dr. Jonathan Fielding, director of public health in Los Angeles County, has agreed that stigma does play a role in African American communities, where MSM  "suffer from stigma, discrimination, from a reduced rate of acceptance for their same-sex orientation, and they also have historically had less access to healthcare…It's been a very serious problem, and we've been aware of it for years."

Previous Post: « One Direction Go Deep In Disguise, Make A Mess, Pimp Their Movie With ‘Best Song Ever’: VIDEO
Next Post: Alanis Morissette Schools The Lonely Island On The Proper Use Of Semicolons: VIDEO »