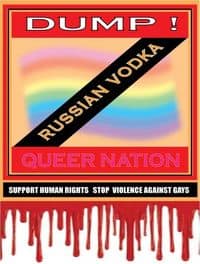 It's been a stressful week for companies like SPI Group, producer of Stolichnaya vodka, as boycotts of Russian products are currently underway in response to the country's anti-LGBT regime under Vladimir Putin.

So far, however, reactions to the boycott have been somewhat mixed. Some commentators, such as Scott Shackford with the libertarian magazine Reason say the boycott was started before all the facts were on the table.

Responding to the arguments that Dan Savage, Queer Nation, and others have made to continue the boycott despite the SPI Group's statement pledging their support to the LGBT community, Shackford says that there is a 'big Western bias' that is being left out of the equation.

Unfortunately, it doesn't seem that the boycotters quite get it. Stoli sent out an open letter Thursday, declaring its support for gay rights, mentioning its history of activity within the gay community in America and other countries. But, Dan Savage posted, this isn't enough. What are they doing about the suffering of gays in Russia? Scheffler (SPI Group's CEO) is one of Russia's richest men!

There's a big Western bias in this argument, assuming that Russia's corporatism is like America's or Europe's corporatism. Because Scheffler's rich, he must have some sort of government influence! There must be something he can do! No doubt there are certainly similarities, but you simply can't ignore Russia's deeply nationalist streak and how closely it's flirting with autocracy. It doesn't take that much research to see how difficult a position Scheffler is in. Russia wants his company.

Shackford goes on to detail how, back in 2002, police ransacked the SPI headquarters in Moscow in an attempt to renationalize the Russian assets of the company. Scheffler himself is wanted for 'questioning' for allegedly threatening the director of the parts of the Russian company that were renationalized.

What's sad about this effort is that if Russia succeeds in getting its hands back on Stoli, then a boycott actually makes sense. But the consequence will be that a powerful businessman who does support the gay community will lose his company. Boycotting Stoli now is a very bad idea. Scheffler is an ally who the gay and lesbian community needs to work with, not alienate. From a Western perspective it may be hard to realize that an incredibly rich person like Scheffler has the potential to be a victim of Russia's authoritarian regime like its gay citizens or members of Pussy Riot, but it's extremely important not to look at the nature of power and influence there the way we do here.

In related news, The Guardian points out that even Russia's own gay rights activists are saying the boycott is misguided:

"They mixed everything up. Stolichnaya isn't Russian," Said the lawyer Nikolai Alekseev, head of the Moscow Pride organizing committee.

Still, SPI Group isn't the only vodka company with ties to Russia. Russian Standard vodka, unlike Stolichnaya, is actually produced in Russia and owned by the Russian oligarch Roustam Tariko. The company has yet to comment publicly about the boycott.