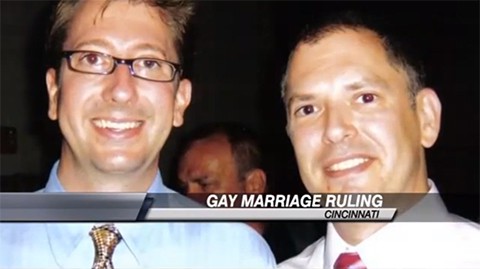 John Arthur and Jim Obergefell, the gay Ohio couple who last Friday filed a federal suit challenging Ohio's ban on same-sex marriage, must be legally recognized as a married couple in the state of Ohio, according to federal judge Timothy Black. Arthur and Obergefell married on a tarmac in Baltimore after they chartered a plane to Maryland especially equipped with medical staff to attend to Arthur who is terminally ill and suffering from ALS, also known as Lou Gehrig's disease. Arthur, who as Judge Black put it, "is certain to die soon" wanted to be recognized as married in his home state when he dies. It appears he will get his wish. BuzzFeed reports:

"The end result here and now is that the local Ohio Registrar of death certificates is hereby ORDERED not to accept for recording a death certificate for John Arthur that does not record Mr. Arthur’s status at death as ‘married’ and James Obergefell as his ‘surviving spouse,’” Judge Timothy Black wrote in granting the couple a temporary restraining order Monday. The order is in effect until 5 p.m. Aug. 5, unless the court extends the order at a later date.

In his decision, Black cited not only the recent landmark case, United States v. Windsor that effectively struck down DOMA, but also the 1996 Romer v. Evans case, both cases in which Justice Anthony Kennedy gave the majority opinion. Judge Black wrote,

“Although the law has long recognized that marriage and domestic relations are matters generally left to the states, the restrictions imposed on marriage by states, however, must nonetheless comply with the [U.S.] Constitution…The purpose served by treating same-sex married couples differently than opposite-sex married couples is the same improper purpose that failed in Windsor and in Romer: ‘to impose inequality’ and to make gay citizens unequal under the law.”

The suit, filed against Governor John Kasich and defended by Attorney General Mike DeWine, was nonetheless not defended by the vital statistics registrar for the city of Cincinnati, Dr. Camille Jones. In a filing presented to the court, Dr. Jones stated,

“The City will not defend Ohio’s discriminatory ban on same-sex marriages,but the City’s vital statistics registrar is bound to follow Ohio law until that law is changed or overturned.”

Rob Nichols, spokesman for Governor Kasich, in response to the ruling told BuzzFeed: “We don’t comment on pending litigation other than to say the that the governor believes that marriage is between a man and a woman.”

Many have already begun to speculate on the implications of this ruling for Ohio and the nation at large.

Watch a video of a local news report from WKEF and WRGT, AFTER THE JUMP…

Previous Post: « Is The Internet Causing People To Leave The Mormon Church?
Next Post: RNC Chair Not Embracing ‘Tolerance’: VIDEO »