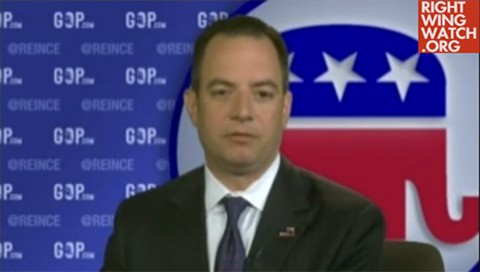 Attempting to put at ease Evangelicals, who "start to grab the Excedrin bottles when they hear [the word] 'tolerance'" in the context of gay marriage, RNC chair Reince Priebus spoke to the Christian Broadcasting Network's David Brody about "the whole gay marriage situation," ThinkProgress reports:

"I don’t know if I’ve used the word ‘tolerance,’ I don’t really care for that word myself. I don’t have a problem with it, I just think it has another meaning politically that can go the other direction. I happen to believe that our principles are sound. I do believe, and I still will tell you that our party believes that marriage is between one man and one woman. Our party believes that life begins at conception. I think those are foundational issues that aren’t going anywhere but what I have said, which I don’t think should be controversial at all and I would think that Christians and pastors and everyone in between should agree that our principles have to be draped in the concepts of grace, love and respect and that’s not code language, that’s the New Testament. […]

Back in April, Priebus received a letter from 13 anti-gay groups threatening to leave the GOP if they did not support a federal constitutional amendment banning same-sex marriage and the now defunct DOMA. They seem like a charming bunch to have to kowtow to all the time.

Right Wing Watch provides video of the interview AFTER THE JUMP…