Over at The Bilerico Project, Michael Hamar has posted a copy of the challenge to Virginia's marriage discrimination amendment that we reported on last week. 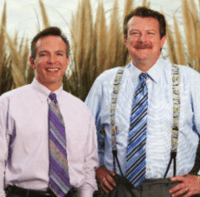 The basic players in the case are the plaintiffs, Timothy B. Bostic, a Professor at Old Dominion University and his partner, Tony C. London, a successful Norfolk area realtor (both pictured right). They have been a couple for over 25 years. The defendants are Robert F. McDonnell, the Governor of the Commonwealth of Virginia, anti-gay zealot Kenneth T. Cuccinelli, the Attorney General of the Commonwealth of Virginia, and George E. Schaefer, III, the Clerk of the Circuit Cort for the City of Norfolk, whose office refused to issue a marriage license to the plaintiffs.

The marriage amendment challenge states, among other things, that Virginia law "fails to honor the laws of thirteen other states and the District of Columbia, which allow for same-sex marriage, by providing that such marriages are 'void in all respects; and by stipulating that any contractual rights from such valid marriages 'are void and unenforceable; in the Commonwealth of Virginia….The disadvantage these laws impose upon gays and lesbians is the result of disapproval or animus against a politically unpopular group. Accordingly, these laws violate the Equal Protection Clause of the Fourteenth Amendment to the United States Constitution by casting gays and lesbians into disfavored legal status and categorizing them as 'second-class citizens."

Check out the full complaint HERE, which leads off with a great reference to Loving v. Virginia, the landmark Supreme Court case that invalidated laws prohibiting interracial marriage.