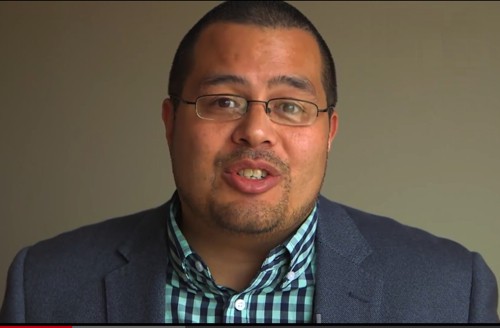 Robert Oscar Lopez is currently a rising star in anti-gay circles. ThinkProgress has previously described him as "an 'ex-gay' bisexual who blames his adult social dysfunction on having been raised by a lesbian mom." Lopez's "testimonies" have been used by the likes of NOM and the American Family Association to perpetuate the erroneous idea that gay parenting is inherently related to child abuse, and increases their risks of falling victim to to exploitation and child abuse. He also runs a blog, the "English Manif". He has also testified against marriage equality in Minnesota. 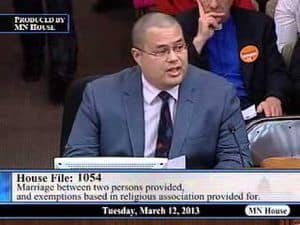 Recently, Equality Matters profiled another, unusual aspect of Lopez's career, that of a gay fiction author. It began in December 2012, with a column in American Thinker entitled "Mean Gays". The column decried the "backstabbing cliques" embedded in the gay community.

"It is time for a Mean Gays moment: a film or something to wake gays up. They need to stop being mean. Unless they can, nothing political will lift the cloud from their lives and allow them the joys felt by those they envy."

That "something, was a three part book series of the same name, which he announced later that month on his blog, Wild West Coconut.

"The three books coming out over 2013 go together in the "Mean Gays" series, following up on an article I wrote for American Thinker earlier this year. Mean Girls was such a pivotal moment for pop culture, because it forced girls and women to examine their interactions and use storytelling to imagine other possibilities."

Lopez even created Twitter and UStream accounts to promote the series. So far, Lopez has only published one book in the series, entitled Johnson Park: Five Gay Boys, One Street, Too Much Shade, or "Johnson Park" for short. The description for Johnson Park on Amazon is as follows:

"JOHNSON PARK is about five gay boys, a city falling apart in the Rust Belt, and a sleazy street wedged between a gayborhood and the barrio. From the county holding center to the drag catwalk to a landscaping nursery; Joseph Mancuso, Angel Morales, Agosto Cruz, Harry Litwin, and Riley Murdock search for their place in a world that doesn't seem to understand them. Sometimes the best you can ask for is a set of doors made of colorful plate glass." 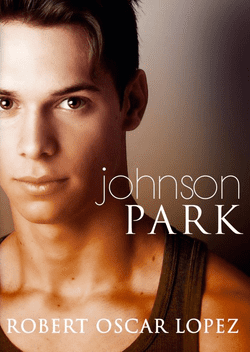 Equality Matters gave their own summary of the convoluted plot, concluding at the end "If you’re having a hard time keeping up, don’t worry. This book is terrible." Beyond literary critiques, however, they also made sure to summarize how the book perpetuates "damaging ideas about gay people". According to their analysis, Lopez "repeatedly employs the idea that gay men seek out young boys for sex,"  and depicts every single gay character as being "miserable" and "comfortable mocking other gay men and using anti-gay slurs." They were also kind enough to include an excerpt from one of the book's (at least) ten graphic and unrealistic sex scenes:

"[Harry] pulled out buckets of flowers, lifting them over his head and emptying them onto the table. Joseph slowly calmed himself, lying passively while Harry pelleted him with lilies, roses, daffodils, daisies, tulips, carnations, lilacs and irises. He rubbed the flowers against Joseph’s skin, letting their fragrances soak into his chest, his arms, and his legs. He went softly at first, tickling Joseph’s nipples and thighs with the stems. Then he probed deeper into Joseph’s skin, rubbing the red, white, orange, violet, and yellow petals into him, painting him with spots of soft, moist perfume."

The second installment of the series, Gay Wars, was due out on June 15, but has not yet been released. Equality Matters noted that the description for the book "sounds like something Lopez came up with during history’s most intense gay fever dream."

"This is a fantasy epic about twenty-six supernatural showdowns between gay ideas, gay people, gay concepts, gay characters. They use weapons both celestial and carnal to duel each other. The whole thing is chronicled by "Coco Rico," an Internet phantom who led the gaywars in 2010, on a defunct site called The Wild West Coconut Show.

There are cameos from everyone ranging from Jack and Ennis to J. Edgar Hoover, Adam Lambert to Coco Chanel, the fifth French Republic to Pandora, and more! It all culminates in the final, cataclysmic showdown for ownership of the gay soul – yes, Ovid's famed characters Narcissus and Hyacinthus will battle it out just beyond the seventh bridge to nowhere, while Marlowe coaches one side against a motley collection of stolen Shakespeare characters on the other side, and Sor Juana and Emily Dickinson form a proto-lesbian cheering section. You won't want to miss this one!"

It is not yet clear exactly how the plot to either book will supposedly stop gays from "being mean to each other". It is also rather unclear as to why such a vocal ex-gay activist, who has previously referred to gay people as “rutting, uncontrolled animals,” harbors such an apparent obsession with the film Mean Girls. Thanks to his fiction, though, one can enjoy "a fascinating look into Lopez’s tortured personal views on same-sex relationships and homosexuality generally." That is, if they are willing to read through over 600 pages of "cringe-worthy" writing.