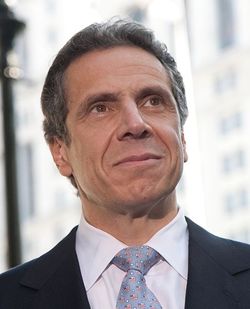 Those familiar to the case that gutted DOMA, Windsor v. United States, know that the suit was prompted by the over $300,000 in extra estate taxes that Edie Windsor was forced to pay as the result of her deceased spouse being a member of the same sex. Now that the Supreme Court has ruled in Windsor's favor, the state of New York is offering refunds to anyone else who might have found themselves in her situation.

Gov. Andrew Cuomo announced the refunds Tuesday, citing the Supreme Court decision to render DOMA unconstitutional. Said refunds apply to any same sex couple considered legally married in the state of New York who were forced to pay any extra estate taxes as the result of DOMA. At present, the state has not made any estimates of exactly how much tax money will need to be repaid.

Upon the announcement, Cuomo expressed his personal support of the refunds:

"This financial compensation is one more step toward justice for Edie Windsor, and all of the men and women who confronted similar indifference at a time of deep personal loss."

According to the Daily Journal (via AP)…

"A refund must be claimed within three years of the tax return or two years after the tax was overpaid. More information is available through the state's Taxpayer Information Center at 518-457-5387."