ABC News editor Don Ennis, who came out as transgender on May 8 and said he had changed his name to Dawn, now says that after experiencing a two-day bout of amnesia he realizes he's not transgender, the NY Post reports: 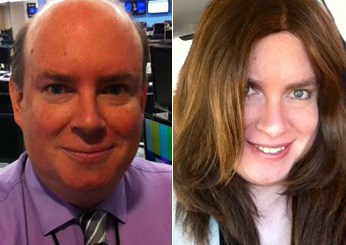 “I accused my wife of playing some kind of cruel joke, dressing me up in a wig and bra and making fake ID’s with the name ‘Dawn’ on it. Seriously,” Ennis wrote in an e-mail to friends and colleagues Friday, explaining his shock after he woke up from what he called a “transient global amnesia” last month.

“It became obvious this was not the case once I took off the bra — and discovered two reasons I was wearing one,” he said, referring to his hormone-induced breasts.

“Fortunately, my memories of the last 14 years have since returned. But what did not return was my identity as Dawn,” said Ennis, who had been wearing lipstick, skirts and heels.

“I am writing to let you know I’m changing my name . . . to Don Ennis. That will be my name again, now and forever. And it appears I’m not transgender after all. I have retained the much different mind-set I had in 1999: I am now totally, completely, unabashedly male in my mind, despite my physical attributes,” he said.

Ennis says he plans to be a strong ally of the LGBT community even though he considers himself no longer transgender.

He called his three-month odyssey into the world of women “a tremendous gift.”

“I know my wonderful colleagues will no doubt make it easier for the next person to transition at ABC,” he wrote.