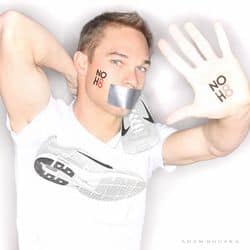 U.S. Runner Nick Symmonds made headlines yesterday by winning the silver medal of the Men's 800-meter at the International Association of Athletics Federations World Championship in Moscow. Thankfully, that's not the only reason why the Oregon native is making headlines. Symmonds also used his moment in the spotlight as an opportunity to speak our against anti-gay laws adopted by the Russian government. He told RiaNovosti:

"As much as I can speak out about it, I believe that all humans deserve equality as however God made them. Whether you’re gay, straight, black, white, we all deserve the same rights. If there’s anything I can do to champion the cause and further it, I will, shy of getting arrested."

He also dedicated his silver medal to all of his gay friends.

Unfortunately, according to the Russian government, comments such as those would be all that's needed to throw an athlete like Symmonds out of the country or in prison. This might explain why Symmonds softened his language a bit later on in the interview, saying that “I respect Russians’ ability to govern their people…I disagree with their laws. I do have respect for this nation. I disagree with their rules.” Nonetheless, RiaNovosti is reporting that Symmonds is the first athlete to publicly criticize Vladimir Putin's anti-gay propaganda laws while on Russian soil.

Symmonds' comments come even after he wrote an opinion piece for Runner's World claiming that he would not discuss the issue of LGBT rights while in Russia. 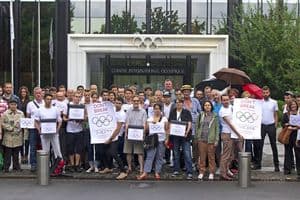 Luckily, it seems as though his conscience and/or passion for advocacy got the better of him. As of right now, no member of the Russian governement has issued a public statement addressing Symmonds' comments or whether they will invite any sort of punitive action. Nevertheless, one athlete has already broken their silence. Given the fact that many, including President Barack Obama, oppose a boycott of Russian sporting events, Symmonds will likely not be the last American athlete to address Russia's instituational homophobia while inside its borders. Eyes are already on the Russian government to see how they will respond.