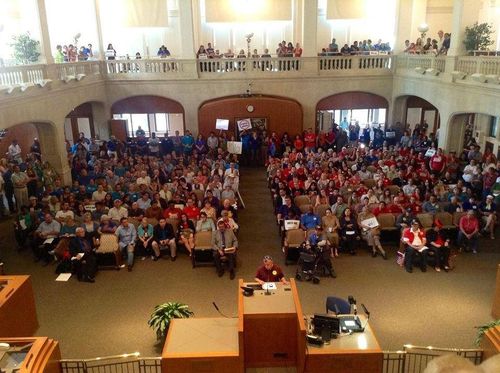 The San Antonio City Council is set to announce soon whether it will add "sexual orientation" and "gender identity" to the city's existing nondiscrimination ordinance. That consideration was what drew hundreds of black and Latino protesters outside of City Hall yesterday. The demonstration, by ministers as well as members of their congregations, was organized to protest more than just the inclusion of LGBT rights. With the celebration of the 50th anniversary of the March on Washington by Martin Luther King, Jr and company, it was also to protest the comparison of LGBT rights with the rights of racial minorities. 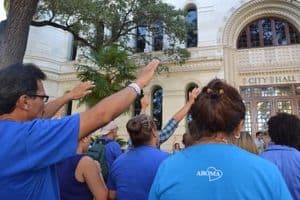 While we love the people involved, we cannot allow their agenda to stain the fabric, the tapestry, of the civil rights movement,” said the Rev. Charles Flowers, an African American minister and early opponent of the city's nondiscrimination expansion. According to MySanAntonio.com, Flowers believes the two movements to be separate because sexual orientation and gender identity are matters of choice, not genetics. His sentiment was echoed by other members of the Baptist Ministers' Union of San Antonio and Vicinity and the Community of Churches for Social Action, both of whom had representatives present yesterday on behalf of more than 110 different congregations citywide. Others were simply concerned that the wording of the ordinance was too vague. Rev. Paul Stevens, pastor of New Covenant Missionary Baptist Church told the press that: 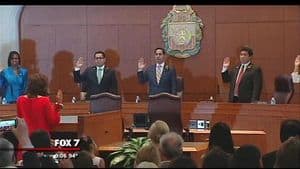 City Council members Diego Bernal, the proposal's author, and Ivy Taylor met with leaders of both church groups to discuss the wording of the ordinance, although no changes were made as a result. Bernal told members of the press that he is open to any necessary fine-tuning of the ordinance. However, he believes the existing one does nothing to interfere with freedom of speech or religious expression. According to MySanAntonio.com, the ordinance only covers "city contracts, business dealings and service on city boards and commissions."

Nettie Hinton, a local member of the NAACP, finds the sudden distinctions between civil rights movements to be baffling:

“We have had gay people in our community for years, and they were not castigated. That was because the greater danger of a gay man then was not his gayness. It was his blackness. And the community rallied around to protect them from the unreligious scourge of the aftermath of slavery. Why all of a sudden are we taking offense that we have gay people in our midst?” 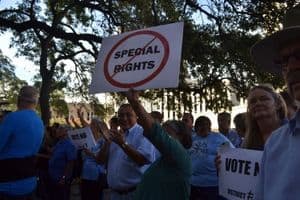 The City Council is currently hearing public comments regarding the new proposed ordinance. Reportedly, City Hall has been so overcrowded that discussion of the ordinance is also being broadcast in two overflow rooms, which still did not prove to be enough:

"The subject has been polarizing, prompting shouting between groups, loud applause at times and at other times, cries of 'liar!' The line of people wanting a seat spilled out into the grounds. Groups held hands and prayed. Others chanted. Some just watched."

You may recognize the San Antonio City Council as the stomping ground of Elisa Chan, the councilwoman who called gay people "disgusting" before refusing to apologize for her bigoted comments.

The Council's final vote is currently scheduled for Tuesday, September 5th, and the measure is expected to pass.