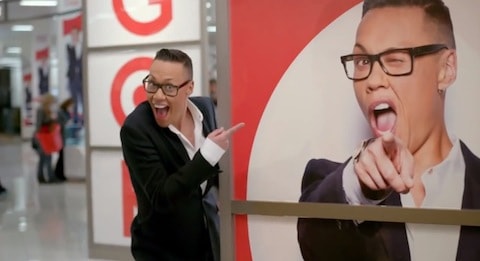 British personality and fashion consultant Gok Wan was brought on to do a series of TV ads for retail chain Target in Australia. The first ad focused on women's underwear and bras, and controversy arose when viewers took offense at Gok's use of the slang term "bangers" to refer to women's breasts. The problem seems to be that, for Aussies, "bangers" refers to literal and metaphorical sausages, so applying the term to breasts is perplexing to some and downright crude or offensive to others.

Target dismissed the complaints, upholding the word as an "irreverent term of affection." Similarly, when the Advertising Standards Board were forced to make a determination about the ad in response to complaints, they ruled that the ad was light-hearted and the use of "bangers" was not discriminatory against women. Still, Target is listening to the complaints and will likely substitute "bangers" with something else in the future to prevent further misunderstandings.

Then there are the knuckle-dragging mouth-breathers who were offended that Target dared use a gay man in their advertisements in the first place. This minority of complaints contained what one typically expects: self-righteous indignation combined with utter obliviousness to the irony of complaining about offensive slang while calling the gay man a "poof."

To these people, Target pulled no punches in making their position clear on their decision to use an openly gay man in their ads:

Target strongly believes that a person's sexuality is irrelevant to their worth as a person. Target makes no apology for using a gay man in its advertising and we do not believe that this should be grounds for upholding a complaint.

You can see the shocking ad for yourself AFTER THE JUMP…