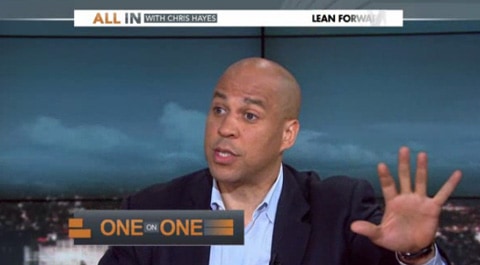 MSNBC's Chris Hayes asked Senate candidate and Newark mayor Cory Booker about recent remarks by his opponent Steve Lonegan mocking Booker's pro-gay remarks, remarks in which Booker revealed he told Twitter followers, "I hope you are not voting for me on the presumption I'm straight."

"The point I'm getting a chance to make right now is that we need to stop in America talking about anybody in the public realm besides what is important, the content of their character, the quality of the ideas, the courage within their hearts to serve others – that's what's important. And so here we have an opponent that is trying to say God-awful things and literally saying 'well I believe a guy should be a guy'. Almost like saying that you are not a man if you're gay. That is so extreme let's shine lights on this for a second…Being a man is about love. About kindness to others. About standing up for what's right. My sexuality is not an issue right now."