Actor and activist George Takei says Russia's anti-gay laws put athletes and visitors in danger, and it's time to call for the Sochi 2014 Winter Olympics to be moved elsewhere. 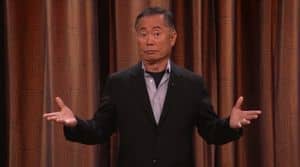 Many believe that such a call to move the Olympics out of Russia goes too far. Would this be their opinion if the law instead called for the arrest of any Jews, Roman Catholics or Muslims should they display any sign of their religion, such as a wearing a yamaka or praying while facing Mecca? Discrimination in any form is a blight upon the Winter Games, and it must not be tolerated.

NBC and the corporate sponsors of the Olympics should be paying close attention, too, and should get behind the “Move the Olympics” movement now, while there is still time to do so. If the Winter Olympics proceed in Sochi, Russia, all of the goodwill they have spent millions to build will evaporate in noisy protests, boycotts, and terrible publicity. I personally will be beating this particular drum loudly, as will many other LGBT actors, activists and allies. Trust me, if you are a corporate brand, you do not want to be associated with the Sochi Olympics.

Nations are not judged merely on their might, but also by how they treat their most vulnerable. Russia’s cynical and deplorable actions against the LGBT community have given license to hate groups within its borders to act with violence and impunity against a group, based solely on whom they were born to love. It now seeks to spread that hate abroad through its tainted Olympics. If Russia hopes to stand with the International Community, it must accept and adopt international principles of equality and non-discrimination.

Tomorrow, the International Olympic Committee will receive more than 300,000 signatures urging it to denounce Russia's anti-gay laws. 83 members of Congress this week called on John Kerry to clarify the U.S. State Department's position on the controversy.

Russian officials have issued conflicting statements about whether athletes and visitors to the Olympics will be prosecuted under the anti-gay laws. Thus far, the IOC has said it is standing by assurances from the Russian government that the laws will not apply to Sochi visitors, which does nothing to change the fact of their existence and the human rights abuses being inflicted upon LGBT people there on a daily basis.

It's Time to Move the Olympics [george takei]