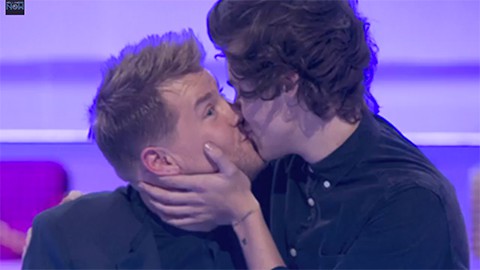 Fresh off his recent twerking tour de force at the Teen Choice Awards, Harry Styles joined One Direction band-mates Niall Horan and Louis Tomlinson and sat down with James Corden for a taping of his talk show, A League of Their Own (which sadly has nothing to do with the 1992 Penny Marshall film). At some point in the banter, Harry, whose bromance with Corden is reportedly well known, popped over to sit on his lap and gave him a smooch. The show has yet to air (read: no video just yet).