Former Illinois Republican Party Chair Pat Brady, who resigned in May after being targeted by his own party following months of controversy over his support for same-sex marriage, has been hired by the ACLU of Illinois to lobby state lawmakers to back the bill, the Chicago Tribune reports: 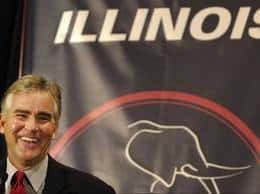 Brady said his job will to be lobby "Republicans and other like-minded folks, but primarily Republicans" in the House where a Senate-passed same-sex marriage bill remains stalled. "It's narrowly focused on the 10 or 11 (Republican lawmakers) who were open to the possibility of voting 'yes' on this," he said.

The pairing of the ACLU and a former state Republican chair might seem "unique," Brady said. But he noted the national ACLU in June hired Steve Schmidt, a veteran Republican adviser to presidents and presidential candidates, to spearhead a $10 million national effort to support same-sex marriage laws.

Brady acknowledged that some Republicans could feel at risk for casting a vote for the measure when lawmakers return to Springfield in the fall with the March primary looming.