83 members of Congress, led by Rep. Jerrold Nadler (D-NY) have sent a letter to Secretary of State John Kerry asking "what efforts have been undertaken, especially efforts undertaken in coordination with other foreign governments" to assure the safety of LGBT athletes and visitors to Russia during the 2014 Sochi Olympic Games, the HuffPost reports. 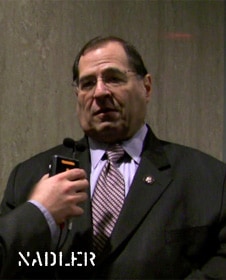 We are writing to you regarding the troubling implications of a recently-enacted Russian law criminalizing actions or statements deemed to be in support of the lesbian, gay, bisexual, and transgender (LGBT) community. In light of the fact that the 2014 Winter Olympic and Paralympic Games are scheduled to be held in Sochi, Russia, we would like to know what diplomatic measures the State Department is planning to take to ensure that American LGBT athletes, staff and spectators, and their supporters, are not arrested, detained or otherwise penalized during the Sochi Games.

The law, signed by President Vladimir Putin on June 30th, will penalize any individuals or groups found to be publicly supportive of LGBT equality. Press reports have indicated that punishable offenses would include public acknowledgment of one’s orientation, displays of affection between same-sex partners, statements in support of LGBT rights, and the use of symbols such as rainbows that are attributed to the LGBT community. Foreign nationals found to be in violation of the law could be arrested and detained for up to 15 days.

We are particularly troubled because while the newly signed law is the most recent and most extreme codification of Russia’s maltreatment of its LGBT citizens, it is also part of larger trend of anti-LGBT actions in Russia.

In light of the importance of U.S. leadership on LGBT issues, and the quickly-approaching Sochi Games, we urge the State Department to determine the appropriate course of action to assure the safety and well being of LGBT and LGBT— supporting individuals involved in or attending the 2014 Sochi Olympics and Paralympics. We look forward to hearing from you regarding what efforts have been undertaken, especially efforts undertaken in coordination with other foreign governments, and are committed to working together with you on this issue.