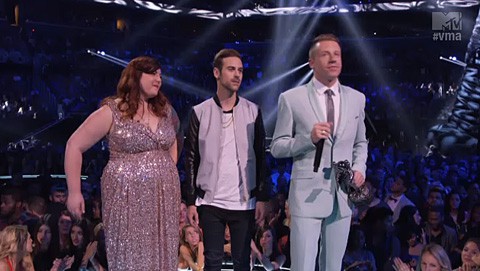 Macklemore, Ryan Lewis, and Mary Lambert took the stage to accept the MTV Moonman at the VMAs for "Best Video with a Social Message" for their marriage equality anthem "Same Love".

"I'll be honest. I really wanted to win the award for Best Rap Video but this Moonman here stands for a lot more. I've been writing songs since I was 15 and out of every single song I have every written to me this is the most important record out of all of them. And to watch this song in the last year spread across the world is a testament to what is happening right here now America on the forefront of equality. Gay rights are human rights there is no separation."

And if you missed the performance of the song they did later in the show (with surprise guest Jennifer Hudson), watch it HERE.

And if you somehow missed the epic video they won the award for, watch it HERE.

Previous Post: « Miley Cyrus Gives the VMAs Its Main WTF Moment with ‘We Can’t Stop’: VIDEO
Next Post: Katy Perry Roars Under the Brooklyn Bridge at the VMAs: VIDEO »