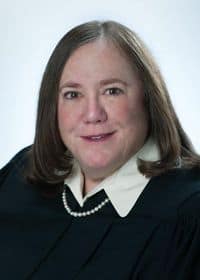 The order late Thursday from District Judge Sarah Singleton (pictured) comes in a lawsuit by two Santa Fe men and represents the first time a New Mexico judge has ruled that gay and lesbian couples can be married, said state Rep. Brian Egolf, a lawyer representing the couple.

Singleton said Santa Fe County Clerk Geraldine Salazar must grant the marriage licenses or appear in court Sept. 26 to tell her why that shouldn’t happen. Salazar did not immediately return a telephone call from The Associated Press.

Egolf said Friday the ruling could help speed a resolution of the gay marriage issue in the state.

Approximately 90 same-sex couples have already received licenses in Doña Ana County, where the city of Las Cruces is located. A group of Republican lawmakers is planning a lawsuit to stop the clerk from handing them out.

Singleton, in her order, said that “reading a sex or sexual orientation requirement into the laws of New Mexico violates the state constitution, which mandates that ‘equality of rights under law shall not be denied on account of the sex of any person.’”