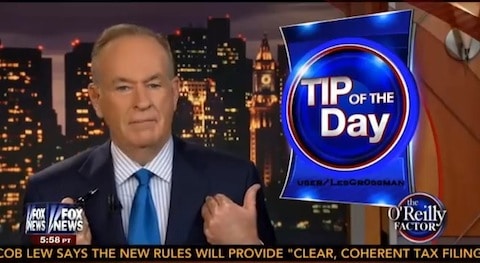 As the news station that is #1 in misinformation, Fox News being wrong about something is de riguer. What is less expected is when they admit to it. The other night, Bill O'Reilly claimed on his show in a discussion with James Carville that no GOP speakers had been invited to the celebration earlier this week of Martin Luther King, Jr.'s "I Have a Dream" speech. However, prominent members of the Republican party had been invited to speak and attend, including John McCain, Speaker John Boehner, Majority Leader Eric Cantor, and former president George W. Bush, who all decllined, though Bush was admittedly still recovering from heart surgery. Former RNC Chairman Michael Steele even slammed his own party for providing no speakers for the event.

Normally, Fox News just doubles down on any claims that they make, dismissing any and all evidence to the contrary. O'Reilly broke from this MO with a mea culpa on his show late Thursday, saying,

I said there were no Republican speakers invited. Wrong. It was wrong. Some Republicans were asked to speak, they declined, and that was a mistake. […] Now, the mistake? Entirely on me. I simply assumed since all the speakers were Democrats, Republicans were excluded.

O'Reilly is the most reasonable voice on Fox News in the way that, as Jon Stewart once quipped, "Is like being the thinnest kid at fat camp." Still, an explicit admission of fault is something to be respected in and of itself, particularly from a station and personality that prefer to pretend that they are flawless.

You can watch O'Reilly's admission AFTER THE JUMP…