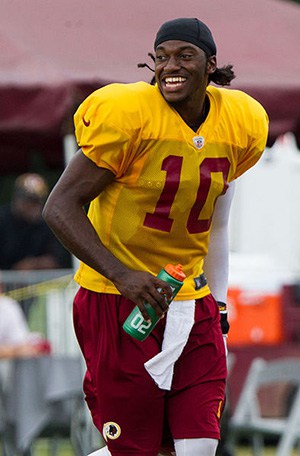 Star quarterback for the Washington Redskins Robert Griffin III, commonly referred to as RG3, told GQ in a recent interview that he believes that now is the appropriate time for a gay NFL player to come out of the closet, The Advocate reports:

"I think there are [gay players] right now, and if they're looking for a
window to just come out, I mean, now is the window," he said in an
interview with GQ. "My
view on it is, yes, I am a Christian, but to each his own. You do what
you want to do. If some Christians want to look at being gay as a sin,
then thinking about other women, committing adultery — or any of those
sins that are in the Bible — those are sins too. And God looks at all of
us the same way."

Griffin's call comes just months after rumors swirled about the possibility of 4 gay NFL players coming out. However, those rumors have yet to materialize into anything more substantial.