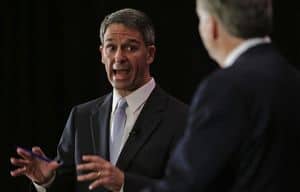 Previously, this past March, the Fourth Circuit U.S. Court of Appeals in Richmond issued a ruling that declared the state of Virginia's Crimes Against Nature Law to be unconstitutional, citing the decision issued by the U.S. Supreme Court in 2003 during Lawrence v. Texas. The state's blatantly anti-gay attorney general, Ken Cuccinelli, took it upon himself to appeal the decision to the U.S. Supreme Court. The court has yet to decide whether it will hear the appeal. In the meantime, however, Cuccinelli submitted a request for a stay, postponing the Fourth Circuit Court's decision until after the appeal.

This past Friday, according to the Washington Blade, Chief Justice John Roberts, acting on behalf of the entire court, denied Cuccinelli's request. The Supreme Court is expected to announce its decision of whether or not to hear the case either later this year or in early 2014. Until then, Virginia's "Crimes Against Nature Law" will remain un-enforcable.

The Fourth Circuit Court's decision comes after attorneys attempted to place William Scott MacDonald, a 47-year-old man, behind bars for soliciting oral sex from a 17-year-old girl. Since no sexual acts actually took place, the state attempted to use its "Crimes Against Nature Law" to do the job. Cuccinelli and others argue that the U.S. Supreme Court's decision during Lawrence v. Texas does not apply in cases where one of the (potential) participants is a minor and the other is an adult. The Fourth Circuit Court disagreed, saying that "while the Lawrence decision prohibited Virginia from applying the sodomy law in cases of consensual sex with someone between 15 and 18, it did not prevent the state legislature from enacting laws banning all sex between adults and people in that age range."