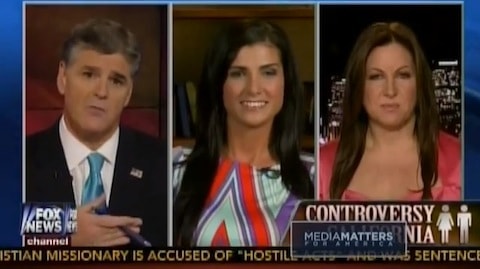 We've reported to you a few times about Fox News' collective freakout over California Governor Jerry Brown signing AB1266 into law that expands the protections of transgender students, allowing them access to school facilities and athletic teams that correspond to their gender identity. Equality Matters has been following the story as well and have compiled a 2-minute video highlighting the fact that for all of the coverage of the issue the 24-hour news network never bothered to bring on experts or transgendered people, instead relying on their commentators to opine on the further moral decay of America.

Some highlights include O'Reilly proclaiming it to be "Anarchy and madness!", Michele Malkin's unfounded claims of "social engineering run amok", and the perpetually-bloviating Sean Hannity crafting the bizarre scenario of a 14-year-old boy invading a 7-year-old girl's locker room.

Mara Kiesling, executive director of the National Center for Transgender Equality, gets right to the heart of their problem:

They don’t seem to want to understand trans people. And I don’t know what Fox News thinks transgender people do in restrooms, but their obsession with it is a bit creepy.

You can watch the video compilation AFTER THE JUMP…

Previous Post: « Gay Singer-Songwriter Solomon Deals with the Aftermath of a Relationship in ‘The Way We Were’: VIDEO
Next Post: Donald Trump Sued For $40M Over Fake ‘University’: VIDEO »