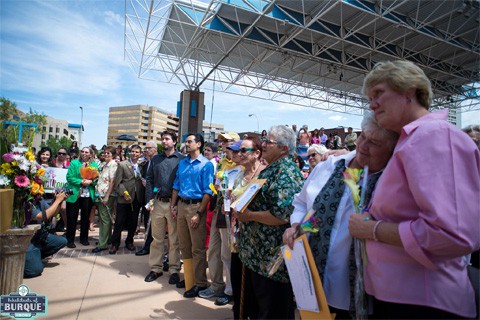 This morning we reported that Albuquerque's Bernalillo County has joined Santa Fe and Doña Ana Counties in issuing marriage licenses to gay couples, thanks to a judge's order.

Rivera also stated that couples who did not wish to wait could apply and receive a license today. Until the new licenses arrive Rivera will make the changes to the old forms by hand.

Valencia County Clerk Peggy Carabajal said she should have gender-neutral licenses ready by Wednesday. She also said she is willing to alter licenses if people want to get married Tuesday.

The AP adds that more than 100 people were lined up for licenses in Albuquerque on Tuesday morning.

The ACLU of New Mexico is celebrating.

Said ACLU-NM Executive Director Peter Simonson: “This is a great day to be a resident of New Mexico.  Our state is now on the brink of joining the growing list of states who live and honor the values of family, liberty and love.  Every family in this state is made richer by this step toward justice for all.”