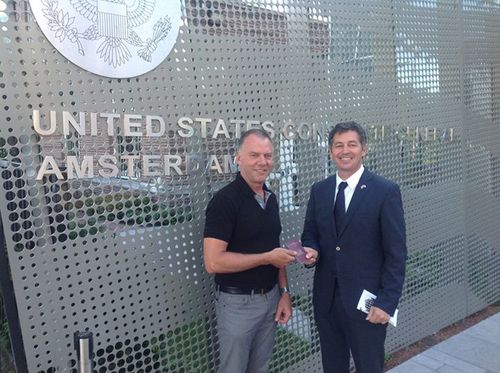 John Kerry's pronouncement on Friday that the U.S. would immediately begin treating visa applications from same-sex couples in the same manner as those from heterosexual couples led to this historic event yesterday.

Mr. Francois Conradie is moving to New York, and visited the U.S. Consulate General in Amsterdam for his L2 visa interview on Friday. Today, he was surprised by Consul General Berry, who presented him with the printed visa placed in his passport. This is the first derivative visa we have had the privilege of issuing to the same-sex spouse of a visa applicant in Amsterdam since the U.S. Supreme Court's repeal of DOMA.

Have a great trip Mr. Conradie!