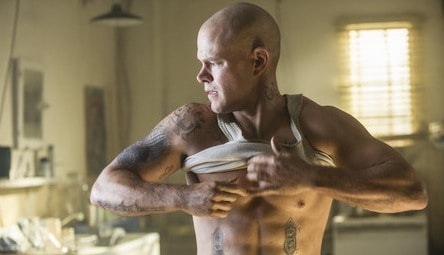 Matt Damon has a gym membership but no healthcare in "Elysium"

In the future everyone has trouble finding good healthcare, there is no middle class, and Los Angeles is a cesspool. So far, so believable. By the future you mean next week, right? Dystopian fantasies work best when they prey on current fears and exaggerate like a mofo. ELYSIUM knows just where we hurt, aiming squarely for our have-not wounds. Though there is no direct talk of politics in Neil Blomkamp's action flick / sci-fi allegory, this 22nd century Earth is a place where the Right Wing have obviously long since won the political wars. The Koch Brothers and Friends, the "Corporations are People!" set, have vacated the filthy planet altogether to rule from afar and horde their wealth. They orbit the earth in mouthwatering luxury aboard the titular space station Elysium which spins like a pricey slo-mo hamster wheel (think 2001: A Space Odyssey. Add bling, swimming pools and golf courses), though it's undoubtedly the 99% who are powering it with their sweaty manual labor.

One such laborer is Max DaCosta (Matt Damon) who is foolishly hoping to 'work his way up' and buy a ticket to Elysium. He's an ex-con, though, and delusional about his future prospects. Even his childhood love Frey (Alice Braga), a stand-up citizen and steadily employed nurse can't afford to move there. In the future good health care is only available to the 1% despite technology so advanced that anything this side of death is instantaneously curable (think magic not medicine) and Max and Frey are out of luck. Socioeconomic mobility is as extinct as the weird animals that Max and Frey look at in picture books as children in flashbacks — what the hell is a giraffe?

And also: why is Jodie Foster so pissed off??? MORE AFTER THE JUMP… 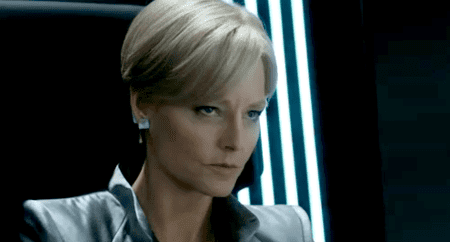 Despite the obvious nature of Elysium's class divide allegory, which is cleverly fused to the equally hot button topic of immigration reform, the movie trusts that we'll keep up without the dead weight of political arguments. The movie never says so but there's also no such thing as Unions or Workmen's Comp or any other worker's protections in this awful future. All of which is very bad news for Max and Frey, who have rather pressing needs on Elysium and every intention of getting there. Jodie Foster as Secretary of Homeland Defense is NOT having it. She's so pissed at everyone that you'd think they violated her privacy as a celebrity and not just the airspace of her gated community. 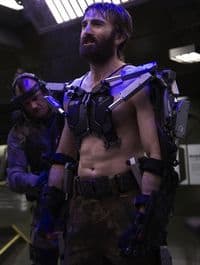 The 33 year old South African Writer/Director Neill Blomkamp made a rather seismic debut a few years ago with the Apartheid allegory DISTRICT 9, a DIY scifi blockbuster that looked far pricier than it could possibly have been and made money hand over fist alien claw in release on its way to four Oscar nominations. That's an unusual amount for a foreign indie OR a genre flick. For his second feature, he hasn't strayed far. The similarities in look and feel and sci-fi fury at human rights violation are omnipresent. The plots even share a sick protagonist who is losing his literal humanity though this time Sharlto Copley, who was so remarkable as the desperate hero in District 9, is in league with the baddies as a cyborg mercenary named Kruger.

Unfortunately the battle over basic human rights versus privileged corruption is less than dynamically conveyed by the actors. The problem may be that both the "haves" and "have nots"  have not when it comes to personality. Damon and Braga are competent performers playing The Hero and The Girl but not much else within this context. Copley and Foster, on the other hand, seemed locked into an actorly contest of who can exude the most evil. Copley's inhumanity is wildly scuzzy, temperamental and over the top. Foster, though, plays EVIL in robotic all caps as if human nuance and shadings couldn't possibly penetrate her waxy synthetic heartlessness. But, oops, she's not the one playing the cyborg. On the whole Elysium isn't a match for District 9 and not just due to these characters. The fetishistic love of guns and weapons of mass destruction, which was admittedly even more pronounced in the earlier film, is a weirdly uncomfortable companion to this story's bleeding liberal heart.

Still, there's no denying Blomkamp's visual imagination and facility with high concept stories and big action scenes. His filmmaking team all do strong work and the film never looks less than great.  Elysium's MVP is the production designer Philip Ivey who brings real world-building allure from the shantytowns of Earth to the luxury of that coveted space station. The best touch is that Medusa-like insignia on the health care machines in every Elysium home; these machines cure everything but their hearts of stone.