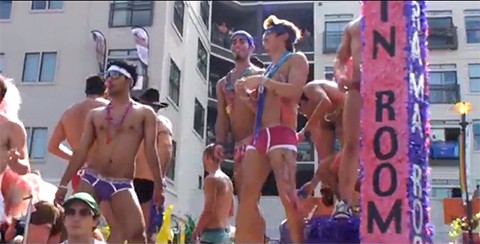 Controversy has erupted over a new dress code being enforced at this year's Dallas Pride, The Dallas Voice reports. The move towards a dress code is intended to prevent "lewdness" and public nudity. Though Michael Doughman, executive director of the Dallas Tavern Guild, the group that puts on the pride parade, has attempted to downplay the controversy, insisting the dress code was not being imposed by the Guild but rather the city and reflects existing laws and ordinances governing lewdness and public nudity, others remain concerned. In a Facebook post rebuking the "new rules," activist Daniel Cates addressed head on why such restrictive regulations are troublesome in the context of a pride parade:

“The ‘queer’ is effectively being erased from our Pride celebration in
favor of the most polished, heteronormative representation of our
community as possible,” Cates wrote. “It should be noted that the
rioters at the Stonewall Inn fought to break OUT of the damn closet! Our
movement was built of sex positivity and our desire to BE WHO WE ARE! I
urge you ALL to openly DEFY the Tavern Guild!”

The police for their part are taking the dress code seriously:

Jeremy Liebbe, a detective sergeant at Dallas Independent School
District, will oversee 95 officers from DPD and DISD as co-commander of
security for the parade and festival. Liebbe, who’s gay, said any floats
in violation of indecency standards will be warned in the lineup on
Wycliff Avenue prior to the parade. If they fail to comply before
reaching the parade route, they will be removed from the parade and
individuals may be charged with class-B misdemeanor indecent exposure.
But Liebbe added: “If there’s an erection and a child is present that
could see it, it is a felony, and we don’t want to see that happen.”

“My goal at all of these events is to have zero enforcement action
taken,” Liebbe said. “But there are some people over the years who’ve
tried to push that line to see just how far we could go.”

Dallas Pride will be celebrating its 30th anniversary this year.