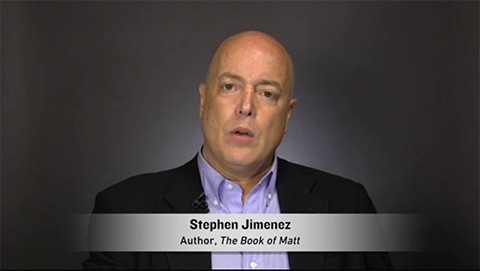 In a new book by Stephen Jimenez entitled, The Book of Matt: Hidden Truths About the Murder of Matthew Shepard, Jimenez puts forward a different telling of the events and motivations surrounding Matthew Shepard's brutal murder in 1998. Jimenez recently sat down with Andrew Sullivan and The Dish to discuss the book.

Jimenez reveals that he first became interested in Matthew's story as he was researching a screenplay he was writing on Matthew's murder. However, upon settling into Laramie and starting to dig into the details of the murder, Jimenez quickly began to suspect that there was more to the story than what was being played out in the press and in the courtroom.

Early on, he claims he found proof that "Aaron McKinney had been a male hustler, had been familiar with gay guys and gay bars" and "that he really did like having sex with gay guys and that he was not unfamiliar with homosexuality and the gay world," which in Jimenez's mind at least seemed to contradict the "gay panic" defense that McKinney's lawyers were putting forth. What began as a trip to "fill in some color and detail" for a screenplay turned into a "13-year investigative obsession," according to Kirkus reviews:

The tragedy was “enshrined…as passion play and folktale, but hardly ever for the truth of what it was”: the story of a troubled young man who had died because he had been involved with Laramie’s drug underworld rather than because he was gay.

Check out the full interview, AFTER THE JUMP…

Stephen Jimenez: How My Research Into Matthew Shepard's Murder Began from The Dish on Vimeo.