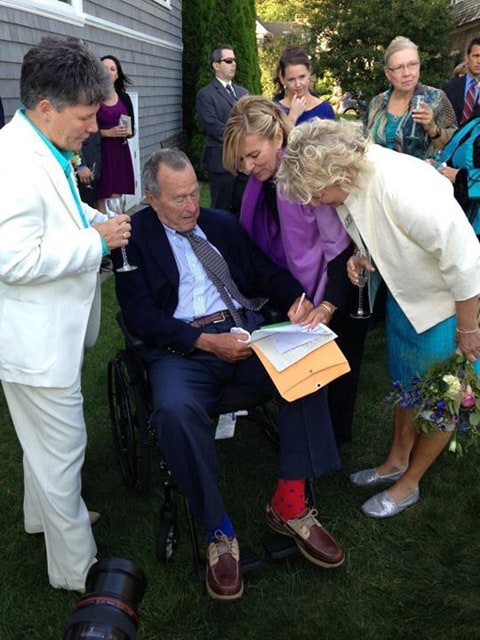 Former President George H.W. Bush served as an official witness at the marriage of Bonnie Clement and Helen Thorgalsen, the owners of a general store in Kennebunk, Maine, close to where the Bush family has a home.

Bush's rep. confirmed the news, which Clement and Thorgalsen posted on their Facebook page, writing: "Getting our marriage license witnessed!"

In an email from their honeymoon in London, Clement told us they’ve known the former first couple for years and were thrilled they accepted the wedding invitation. Thinking about “how monumental this time is in our lives” and “how blessed we are to be in their lives,” they decided to ask them “to really personalize it for us” as witnesses.

“This is such a wonderful time for change in our legal system,” she added. “Who would be best to help us acknowledge the importance of our wedding as our friends and as the former leader of the free world. When they agreed to do so we just felt that it was the next acknowledgment of being ‘real and normal.’”

Clement and Thorgalsen have been together for 12 years.