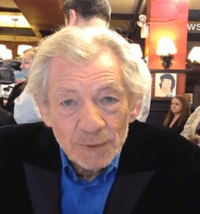 At a press event in NYC for his new Broadway plays "No Man's Land" and "Waiting for Godot," Ian McKellen shared his thoughts on Russia's anti-gay law and its impact on the upcoming Olympic Games in Sochi.

The Wall Street Journal reports that while the British actor opposes a boycott of the entire Games, he hopes that in the 'spirit of the Olympics' athletes and allies will stand united and ignore the anti-gay law:

"The Olympics is a very special event and for the people involved, of course, probably the climax of their lives. If we were to not hold the Games because of the internal politics of the country in question, the problem is they would never take place…As a gay man it is absolutely appalling that this law has been passed which would inhibit me and any gay athlete that would go to Russia to be simply themselves…I think what would be wonderful is if all athletes, gay and straight, and the Olympic authorities were to make clear that they absolutely disapprove of it and they are going to ignore it, not because they don't care but because of the spirit of the Olympics must take precedence."

Check out the full clip, AFTER THE JUMP…