Amazon founder Jeff Bezos, who bought the Washington Post earlier last month, says he's eager to start "conducting experiments" and says his strategy will be that of an internet start-up, the paper reports: 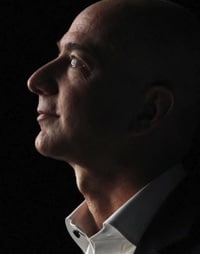 “We’ve had three big ideas at Amazon that we’ve stuck with for 18 years, and they’re the reason we’re successful: Put the customer first. Invent. And be patient,” he said. “If you replace ‘customer’ with ‘reader,’ that approach, that point of view, can be successful at The Post, too.”

Bezos, 49, spoke via phone from Seattle on Friday, four days before he was scheduled to visit The Post for the first time since the announcement of its purchase from The Washington Post Co. and the controlling Graham family. The sale, which shocked the news industry, is expected to close in October.

Bezos says his main contributions will be his "point of view" and financial support over a lengthy period:

“If we figure out a new golden era at The Post . . . that will be due to the ingenuity and inventiveness and experimentation of the team at The Post,” he said. “I’ll be there with advice from a distance. If we solve that problem, I won’t deserve credit for it.”

Previous Post: « Diana Nyad Talks to CNN’s AC360 About Her Triumphant Cuba to Florida Swim: VIDEO
Next Post: Celine Dion Starts September with ‘Loved Me Back to Life’: AUDIO »