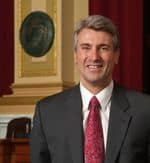 The Democratic mayor officiated 46 same-sex weddings on August 1, when the new law went into effect. He's inviting same-sex couples from other states to hold their ceremonies in Minneapolis.

Rybak is traveling to Chicago this week to launch an ad campaign, followed by visits to Madison, Milwaukee and Denver.

"Heck, if we get 30 couples from Chicago to come up here and do a wedding, that's 30 weddings, 30 wedding parties, 30 rentals of great places, 30 florists," said Rubak. "You begin to ripple that through the economy — now it's assumed we're going to get more than 30 — that's a lot of money…We really think this could have a very significant financial impact."

The Minneapolis Convention and Visitors Association, a co-sponsor of Rybak's campaign, is offering free wedding planning services to interested couples.

Previous Post: « ‘Dancing with the Stars’ 2013 Cast Revealed: VIDEO
Next Post: HIV/AIDS and the Gay Community: A (Belated) Report from Lavender Law »