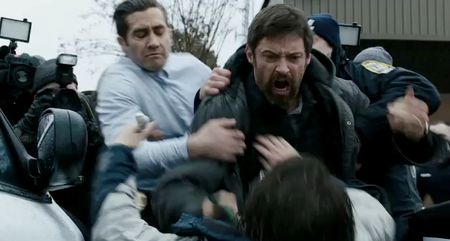 Thanksgiving in movies is usually overstuffed with dysfunction and hostility. Who can digest from all the bile at home? That’s not the case in PRISONERS, the new dramatic thriller from undersung Canadian director Denis Villeneuve (Incendies), which is more retrograde in its approach with the family unit as something sacred and continually under attack. Despite the occassional interjection of ominous music (shut up Jóhannsson… there’s plenty of time for your score later!) and an initially drab grey color palette, things seem realistically jovial at this get together.

The Dovers (Hugh Jackman + Maria Bello) are celebrating the holiday at the home of the Birches (Terrence Howard + Viola Davis) just down the street — close enough to walk — as they clearly do every year (or perhaps they trade off). The parents are realistically both amused and vaguely annoyed by their children, attentive but ‘don’t bother me’ tired. It’s only when the film leave the homes of the Dovers or Birches that there’s trouble brewing… somethings just off. Why did the movie open with a father/son hunting trip? Why is that strange RV parked on the road? Where did Anna’s (Hugh’s daughter) red emergency whistle go?

Are Joy and Anna back yet? The two youngest children just went back to the Dovers to grab that red emergency whistle they wanted to p… ohmygod where are Joy and Anna? 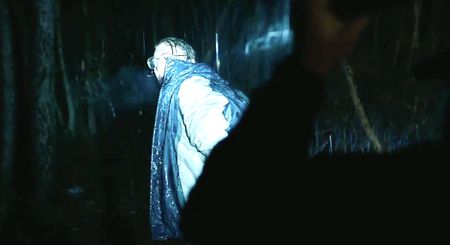 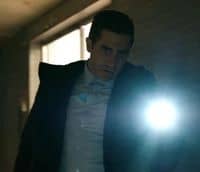 The red whistle is not a red herring. Instead, that damn missing whistle acts as a perfect talisman for the movie itself. Prisoners begins emitting piercing psychic cries as the parents spin out of control and the mysteries thicken and the hours drag on. Statistically speaking, things dont look good for missing children after the first couple of days. Keller Dover (Jackman) is a survivalist who believes in being prepared but how do you prepare yourself or your family for the worst nightmares? When a local ace detective Loki (Jake Gyllenhaal) can’t make a case stick against the man in the RV (Paul Dano, in greasy/creepy mode) Keller decides to take the law into his own hands, plunging both families and a third one (Dano and his aunt played by Melissa Leo) into an increasingly gruesome nightmare from which its uncertain that any of them will emerge with their souls intact.

Prisoners will undoubtedly remind a lot of people of David Fincher’s Zodiac (2007), another film that invites you to lose your mind over Jake Gyllenhaal’s soulful handsomeness while Jake Gyllenhaal loses his mind over maddening puzzles, dropped like poisoned crumbs from serial killers. (Has any actor ever so expertly conveyed “needs a hug” “needs to be left alone” “needs to be cooperated with” or “needs to be kissed” as Jake at his finest. I mean… 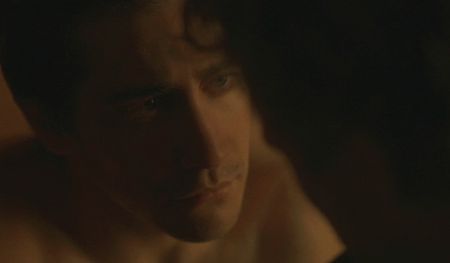 (not a still from Prisoners)

It’s those inescapably big pleading eyes you can get all but lost in. (But enough about my boyfriend.) These Zodiac comparisons are merely cosmetic.

The film it most calls to mind deep in the marrow is actually Clint Eastwood’s Mystic River (2003), both for the starry miserable cast (beloved faces in pain everywhere you look!) and the moral rot of “is that my daughter in theeeerrrrrre?” parental grief and intimations of long ago child abuse. Prisoners also shares with Mystic River a barely noticeable thin sheen of flop sweat, as if every moment could tip over into the risibly pretentious, weighed down by the self-regard of High Art treatment of Low Brow genres. This filmmaking team isn’t kidding around: Villeneuve and his editors are giving us everything they’ve got with the pacing (despite a lengthy running time); famed cinematographer Roger Deakins (True Grit, Skyfall) is making sure every wet windshield and flashlight makes the visuals sing; and the actors all attack the material full throttle, though some chew scenery with more realistic delicacy than others.

My favorites among the cast were Viola Davis (who is, no joke, always perfect. Why can’t Hollywood give her leading roles after her sensational work in The Help?), Hugh Jackman (too fine and appealing an actor to make this angry dangerous man tip over into the insufferably hateful), David Dastmalchian (who some will remember as one of the Joker’s henchmen in The Dark Knight) who is both unnerving and weirdly sympathetic as a suspect Loki pursues, and Jake Gyllenhaal himself, who works so hard at making this earnest detective three dimensional (with virtually no help from the screenplay since the detective’s persona is the least of its concerns). I’d gladly follow Loki into a whole film franchise of his own.

Prisoners drives so forcefully into its various climaxes of conscience or bodily harm in the final hour that it continually risks running head first into a calamity of silliness (the plot is, how shall we say,… baroque) including, quite literally, in a terrible ‘there’s not much time!’ driving sequence to an Emergency Room. We know how that scene is going to turn out (despite plentiful well crafted surprises elsewhere) which makes it embarassingly gratuitous. Yet to the great credit of Prisoners and its strong cast, most of the time you’re too tense to think about jumping ship. Or even why you’re in the car or where you’re going. Most of the time you’re content to ride shotgun as it careens through rain-soaked streets or chases its protagonists on foot into their murky labyrinthine moral quandaries or the dimly lit recesses of their souls suburban homes. Prisoners loves to fade to black at crucial moments when you’re expecting a release of the tension. That’s a fitting flourish for a movie that races so stubbornly and heedlessly towards all of its darkest impulses. 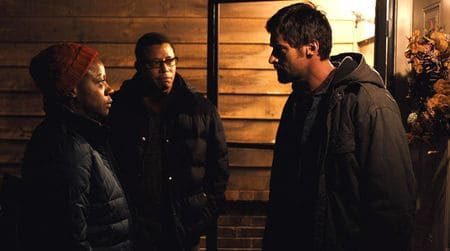 Previous Post: « Maggie Gallagher on the Pope: I Would Love ‘Nothing More Than to Be Wrong’ on Gay Marriage
Next Post: Start Your Sunday with This Gorgeous New Ballad from Kelis: AUDIO »