New Mexico is trying its hardest to resist the inevitability of legalized same-sex marriage in the state. Much like trying to drag an ill-tempered cat out from under the bed, progress is made inch by inch in a protracted struggle. Sometimes, though, the cat bites back. 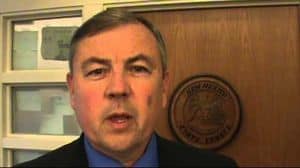 After careful review of New Mexico's laws it is clear that the state's marriage statutes are gender neutral and do not expressly prohibit Doña Ana County from issuing marriage licenses to same-gender couples.

New Mexico Republicans take issue with Ellins' actions, and seven state GOP lawmakers have filed suit to stop him from issuing same-sex marriage licenses. Sen. William Sharer (pictured) of Farmington, one of the senators opposed to Ellins' actions, said that Ellins "should not be allowed to create law out of thin air.”