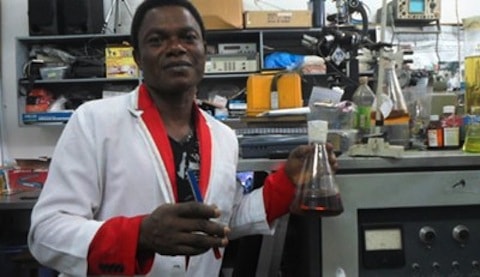 Chibuihem Amalaha of the University of Lagos in Nigeria has made what he believes is a scientific breakthrough: using physics, chemistry, biology, and mathematical experiments, he has proven that gay marriage is wrong.

Physics – with magnets, like poles repel while opposite poles attract, thus should like sexes repel and opposite sexes attract.

Chemistry – an acid mixed with a base will react and result in a neutral solution, while acid added to acid or base to base remains acid or base with no reaction, thus a woman added to a woman or man to man will not react.

Biology – animals like chickens and lions in zoos are not observed engaging in same-sex mating and sperm and eggs are both needed to make children, thus biology proves that gay marriage is wrong.

Mathematics – A + B = B + A, but A + A = A ("Actually in abstract algebra, A + A =2A but we are less concerned with the numerical value two") and because the result is the same there is no reaction, thus commutativity and idempotency prove that gay marriage is wrong.

Amalaha hopes to have his findings published in international journals, but is presently having troubles securing the funding necessary. One day he wants "to be the first African to win Nobel Prize in science," a difficult goal given that Max Theiler of South Africa won it for Medicine in 1951, Claude Cohen-Tannoudji of Algeira won it for Physics in 1997, and Ahmed H. Zewail of Egypt won the Nobel Prize for Chemistry in 1999.