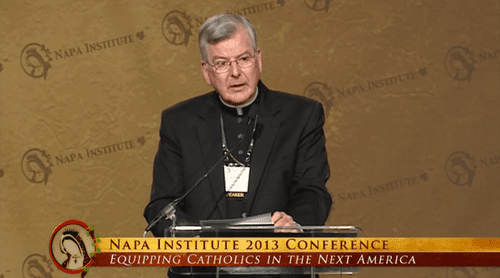 Over the past few years, Minneapolis Archbishop John Nienstedt has been one of the more visible adversaries in the fight for LGBT rights and tolerance in Minnesota. He spearheaded a mass mailing of 400,000 anti-gay DVDs in 2010, created a special "marriage prayer" to drum up support for the anti-gay amendment on the state's ballot last November, and even told the mother of a gay son that she must reject him or risk burning in hell.

With such a bigoted view of gays, it comes as no surprise that Nienstedt places homosexuality squarely on the side of Satan. Speaking at the conservative Napa Institute Conference last month, Nienstedt listed off all the evil works of the devil, which in addition to homosexuality include abortion, contraception, and pornography. The Huffington Post reports:

"Today, many evil forces have set their sights on the dissolution of marriage and the debasing of family life," Niendstedt said. "Sodomy, abortion, contraception, pornography, the redefinition of marriage, and the denial of objective truth are just some of the forces threatening the stability of our civilization. The source of these machinations is none other than the Father of Lies. Satan knows all too well the value that the family contributes to the fabric of a good solid society, as well as the future of God's work on earth."