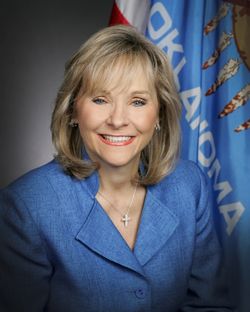 Fallin spokesman Alex Weintz told The Associated Press on Tuesday that the governor was following the wish of Oklahoma voters, who approved a constitutional amendment that prohibits giving benefits of marriage to gay couples.

Because of that prohibition, Weintz said the governor’s legal staff advised the Oklahoma National Guard not to process requests for benefits from gay couples.

"Since the governor of Oklahoma has decided to join Texas, Mississippi, and Louisiana in playing politics with our military families, we need immediate and decisive action from the Administration and the Defense Department in affirming that all military spouses, regardless of sexual orientation, will be treated equally. Our military families should not be left vulnerable to the prejudice of state governors, and the Defense Department must use it's control of federal funds to stop this discrimination."