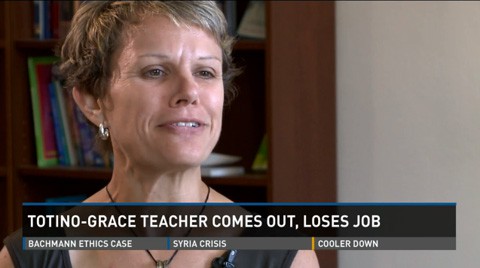 Religion and English teacher Karen Ostendorf is the second educator this year fired from Totino-Grace High School in Fridley, Minnesota, for being gay.

Silent about being gay was a palatable exchange for Kristen she said until this past summer when Totino-Grace High School President Dr. Bill Hudson resigned when the school board learned he was in a same-sex relationship.

"There comes a point when the internal struggle and the reality of the work I was doing is too much," Ostendorf said of that time.

Without thinking Kristen said she stood up at a faculty staff meeting last month and told the truth.

"I heard myself saying most of you know I'm gay and I'm in a relationship with a woman," she recalled of that fateful August 21st meeting.

That sentence would seal her fate. 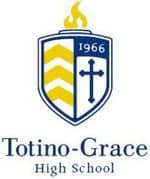 It wasn’t planned. It was a very surreal moment when I heard myself saying the things I tried not to say. And I was at once terrified and really glad and proud. I didn’t just say, “I’m gay, I’m in a relationship with a woman, and I’m happy,” and sit down. That really wasn’t the point of what I was saying. It was, “This is my prayer for all of us: That we mean what we do.” Then I sat down and I thought, “I wonder what’s going to happen next?” I hadn’t considered [the repercussions], but I didn’t know I was going to say what I said.

There was silence in the room. I wasn’t surprised. Nobody stands up in a room of 120 people in a Catholic school and says, “I’m in a relationship with a woman,” when you’re a woman. Afterwards I got emails from people who said, “I’m proud of you,” and “My only sadness is that I didn’t stand up and applaud or yell, ‘Amen.’ ”

I said to them, “Most of you know I’m gay.” And that’s a true statement. Afterwards, I just felt weird, like I had to get out of there. So I left and went for a walk with a friend, talked and prayed with some friends, and went home. My house was full of people in the afternoon and evening, and we ate pizza and talked, and I just waited for the other shoe to drop. I didn’t know what that would mean, but frankly I was hoping someone in a position of power at the school would show up and say, “This really sucks, but we love you.”