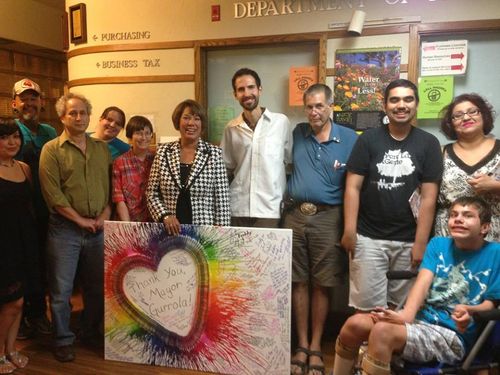 This week Porterville, California mayor Virginia Gurrola was removed from office by a homophobic and vindictive City Council angry that she had dared issue an LGBT Pride declaration in June.

Reddit user 'nowaykd' posted the above photo yesterday showing support for Gurrola from the LGBT community.

In 2009, Porterville, California's City Council faced outrage from some of the community after it passed a resolution publicly supporting Proposition 8. 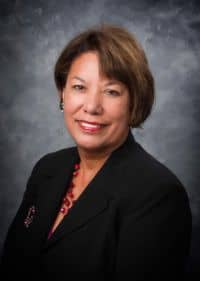 Earlier this year the town had a heated debate over plans by some of the Porterville City Council members to rescind an LGBT Pride proclamation made by the city's mayor, Virginia Gurrola. An overflow crowd turned out at the City Council meeting in June .

The religious community had been up in arms over Mayor Gurrola’s issuing of the Pride Month proclamation from the moment they heard about it. Even though the process in Porterville has always been one of community members submitting a request to the City, and of the Mayor approving that request and presenting it at a Council meeting, speakers harangued Mayor Gurrola over the course of the next three council meetings for exceeding her authority, and daring to present such an evil thing. Council members Ward, Shelton, Hamilton, and to a lesser extent McCracken, all spoke against the proclamation the night it was issued. Public comment during the meetings included a lot of vitriol directed at Mayor Gurrola by the religious community, with at least two speakers calling for the Biblical punishment for homosexuality – that homosexuals are “worthy of death”. A few screamed at the Mayor while waving Bibles in the air. Speaker after speaker rose to condemn the LGBT community, spouting falsehood after lie after endlessly disproven statistic and other made up nonsense. Above it all, on the wall behind the council members, are the words “IN GOD WE TRUST”. 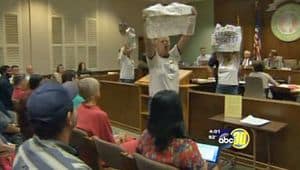 In July, the City Council voted 3-2 to rescind the mayor's LGBT Pride proclamation, prompting a protest by three activists who stormed the chamber holding up signs reading "liars" and bigots". They were arrested.

The City Council majority this week succeeded in a plan to punish Gurrola and the Vice Mayor Pete McCracken by removing them from office. The LGBT Pride declaration was behind the ousting.

Gurrula says she wasn't surprised with outcome, given her recent support of gay rights issues.
Supporters of Gurrola say there was no reason to remove her from her post as mayor. But they say her position to support a proclamation designating the month of June as LGBT pride month, is the reason behind the shakeup.

But the new Mayor Cameron Hamilton says that wasn't the case to switch leadership.

According to the city's charter, the mayor and vice mayor are allowed to serve a two-year term. But either may be removed before their term is up by a council's majority vote.

Watch ABC30's report on the ousting, AFTER THE JUMP… 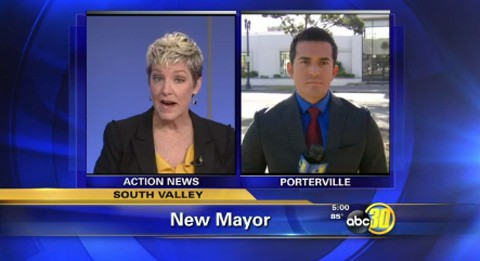