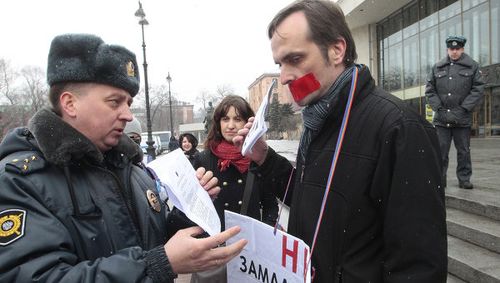 President Obama met with Igor Kochetkov (above, being detained for 'gay propaganda' in April 2012), Director of the Russian LGBT Network and Olga Lenkova (below), a spokesperson for the St. Petersburg LGBT organization Coming Out for a little more than an hour Friday evening at the Crown Plaza near the St. Petersburg airport with UN ambassador Susan Rice, U.S. ambassador to Russia Mike McFaul, and seven other Russian civil society activists, according to a pool report. 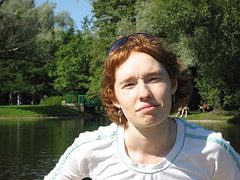 Said Obama to the activists: "I got my start as a community organizer, somebody who was working in what would be called an NGO in the international community. I got elected president by engaging people at a grass roots level."

Obama also said, referring to the activists: "I'm very proud of their work… Part of good government is making sure we're creating a space for civil society."

No further details on the content of the meeting have been provided.

UPDATE: Obama's remarks at the roundtable, as provided by the White House.

PRESIDENT OBAMA: I just want to say thank you to all the participants in this roundtable. This is an incredible and very diverse group of civil society leaders. And this is something that I really enjoy doing at every country that I visit because it is my firm belief that a country's strength ultimately comes from its people and that as important as government is — and laws — what makes a country democratic and effective in delivering prosperity and security and hope to people is when they've got an active, thriving civil society. And all of these leaders, ranging from business leaders to youth leaders to environmental leaders, those who are advocating on behalf of a free press, the rule of law, all of them contribute in one way or another to continuing to strengthen Russian society and helping to make progress on behalf of all people.   And the same is true in the United States. I'm now in government, but I got my start as a community organizer, somebody who was working in what would be called an NGO in the international community. And the work I was doing was helping poor communities have a voice in what was happening in their lives. And I got elected as President by engaging people at a grassroots level.So the kinds of activities that are represented here are critically important to Russia's development, and I'm very proud of their work. And I think it is important for us to remember that in every country — here in Russia, in the United States, around the globe — that part of good government is making sure that we're creating a space for civil society to function effectively: freedom of the press, freedom of assembly, making sure that people can join together and make common cause around the issues that they care deeply about.So I appreciate you taking the time. I'm not going to do all the talking here. I want to spend most of my time listening. But I want to thank you again and I hope all of you continue the good work.

Previous Post: « What Does it Take to be a Male Swimsuit Model at NY Fashion Week? — VIDEO
Next Post: LGBT ‘Safe Space’ Posters to Remain Down Following TN School Board’s Review of Anti-Bullying Policy »